Posted on January 4, 2022 by Communications Manager

The Elections and Boundaries Commission (EBC) has started its preparations for the upcoming Bye-Election in the electoral district of Debe South.

On Tuesday 4th January, 2022 Returning Officer, Ramawatee Rampersad Ganga Persad was presented with the Writ of Election by Chairman of the EBC, Mark Ramkerrysingh. The Writ of Election, which was issued by Her Excellency, Paula- Mae Weekes, O.R.T.T. gives Mrs. Rampersad Ganga Persad the authority to conduct the election for the EBC in the electoral district of Debe South.

On Monday 3rd January, 2022 Prime Minister Dr. the Hon. Keith Rowley announced that there will be a Bye-election in the Electoral District of Debe South on February 7th, 2022. 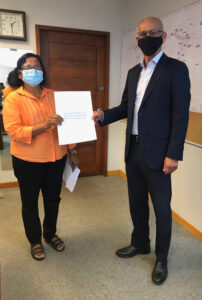