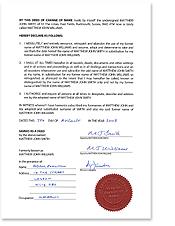 What is a Deed Poll?

Deed Poll is a legal document – not a certificate. It is a form of legal contract but it differs from legal contracts between two or more parties in that it only concerns one person (and it is only signed by that person in the presence of a witness). A Deed Poll legally binds the person who signs it to a particular course of action as detailed on the Deed Poll document.

Although Deed Poll documents are used for various purposes relating to an individual or a company, legally committing themselves to doing something, they have one generally accepted meaning and usage and that is for officially recognizsing a change of name. However, the correct legal name for a deed that has been drawn up to change someone’s name is a called a Protocol of Deeds but more commonly known as a Deed Poll.
A Deed Poll for a change of name contains three declarations and by executing the Deed Poll (signing, dating and having your signing witnessed) you are legally committing yourself to:

Importantly, Deed Poll documents carry an official seal, so there is no question about their authenticity.

In summary, a Deed Poll issued will provide you with documentary evidence that you have changed your name, enabling you to get all your official documents and records changed to your new name.